Wykivia and Ideare Bailey were taking every precaution. Worried for their asthmatic daughter due to the spread of COVID-19, the couple was meticulous in cleaning, sanitizing, and social distancing to reduce every possible threat. However, when Ideare was arrested for property theft and booked into the Dallas County Jail on April 6, there was no way to adhere to those precautions. Held in a crowded intake room, he could not maintain six feet of distance from other people. Forced to live in a dormitory with 60 other people — for meals, downtime, sleeping, bathing, everything — Mr. Bailey knew that he was in trouble.

On phone calls with his wife Wykivia, she could hear men coughing loudly in the background. Without a mask and no way to stay apart from the men coughing in his dorm, Mrs. Bailey told her husband to cover his mouth with a t-shirt while he slept.

Unfortunately, none of this was enough. Mr. Bailey grew sick, and progressively worse each day. Despite numerous requests for medical care and multiple trips to the infirmary, the nurses would not even take his temperature. After four days of growing worse, jail staff finally took his temperature on April 10 — it was 106 degrees Fahrenheit. Three days later, Mr. Bailey tested positive for COVID-19. The next day, for the first time since his incarceration, the jail gave him a mask to wear.

Even after the diagnosis, the medical care Mr. Bailey received in the jail with COVID-19 did not amount to much; he had his temperature checked each day and received Tylenol. As it got harder to breathe, Mr. Bailey became scared. If he wanted to get a nurse’s attention, he had to bang on the window of his cell. The jails did not administer insulin for his diabetes, and his oxygen levels were not checked. His wife — left with few options to protect her husband, and busy caring for their children alone — grew desperate. She had a panic attack that required EMS to come to her house.

Wykivia Bailey went to incredible lengths to get her husband home where he could self-isolate, hydrate, and receive proper nutrition. Because Ideare Bailey was only incarcerated because he could not afford bail, Mrs. Bailey hired a lawyer to seek a bail reduction. Even after seeking the reduction, the family could not afford the bail or a non-refundable deposit to a bondsman. Undeterred, Mrs. Bailey sold her wedding ring to make a bail deposit — money she will never get back. The only barrier left was a requirement that Mr. Bailey be fitted with an ankle monitor.

Yet after all these efforts, Dallas County officials refused to release Mr. Bailey — even after his bond had been paid. The reason? Pretrial services staff refused to touch him because he had contracted COVID-19 in the jail. When his wife pleaded with the pretrial services department to release her husband, the staffer told her, “If he wasn’t out there breaking the law, then he wouldn’t have been put in the Dallas County Jail to catch COVID.”

Ideare Bailey became one of twelve plaintiffs in a federal civil rights lawsuit brought by the ACLU and partners against the Dallas County Jail for its failures to keep incarcerated people and staff safe in the wake of COVID-19. As COVID-19 spreads rapidly throughout local jails, many officials fail to see the humanity of the people whose health and well-being they are responsible for. People like Mr. Bailey have petitioned the federal courts during this frightening and unprecedented time for emergency intervention. Further, as Mr. Bailey’s story illustrates, all too often people are left behind to suffer and even die despite doing everything they can to seek their freedom.

Jails and prisons are the most dangerous places in America during the COVID-19 crisis — eight of the 10 largest “hotspots” for the virus are jails and prisons. As incubators for the disease, outbreaks in jails cause more infections, hospitalizations, and preventable deaths not only for those who live and work in the jail, but the entire surrounding community. Yet officials like those in the Dallas County Jail have failed to sufficiently reduce the population to enable social distancing, or to get those most vulnerable out of the dangerous environment: Dallas officials continue to detain over 2,000 people who are over 50 years old or who have underlying medical conditions that make them particularly vulnerable to serious illness or death as the disease sweeps through the facility.

In late April, the ACLU and our partners had a four-day hearing via videoconference in our request for emergency relief on behalf of hundreds of people like Mr. Bailey. Two medical doctors, a formerly incarcerated man, a guard at the Dallas County Jail who had been told not to wear a mask because it would “spook” the people incarcerated, and Wykivia Bailey all testified. We sought an order that would bring the jail into compliance with public health guidance and gain the release of the most vulnerable people.

All the lawyers, witnesses, and staff were allowed to participate in this unusual, lengthy, and detailed hearing from the safety of our offices and homes in social isolation. To this day, our clients remain crowded in bunkbeds, arm’s length apart. Last week, the federal court denied our emergency request without explanation. We are still waiting for a reason.

The fight to hold officials to account and to address this unfolding public health and human rights catastrophe is ongoing, and our advocacy in and out of courts across the country continues. Families like the Baileys are depending on us.

Prevent a Covid-19 outbreak in prisons and jails 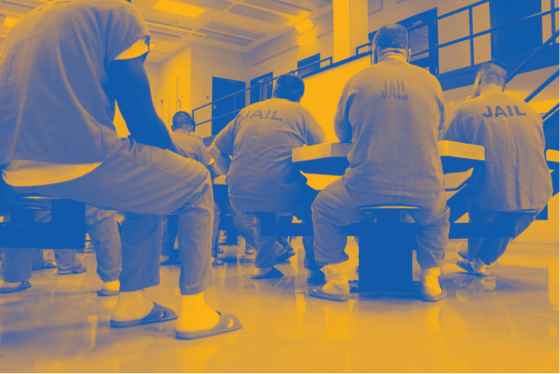 ACLU of Texas Statement on Killing of Black Man by Killeen Police...

Allowing COVID-19 to Spread Unchecked in Texas Jails Threatens the...