The American Civil Liberties Union of Texas is a leading civil rights organization in the Lone Star State. Since our formation in 1938, we have worked in the courts, the legislature, and through public education to protect civil rights and individual liberty.

Our mission is to be the unyielding guardian and promoter of freedom, justice, equality, and dignity of all people, particularly for those who are still fighting to secure the full exercise of their civil rights and liberties in Texas.

We began our work in Texas with the San Antonio pecan sheller’s strike of 1938, where laborers who tried to exercise their rights to free speech and free association in order to improve their working conditions were met with a brutal response by law enforcement. With our help, the shellers ultimately won their battle, and the ACLU of Texas has remained on the front lines of the fight for civil liberties ever since.

Today, the ACLU of Texas continues our work to secure and protect civil rights for Texans throughout the state. In the courts and in the legislature, we fight for smart justice reforms that treat everyone fairly. We fight for immigrants that have been unconstitutionally detained and discriminated against. We fight for racial equality, LGBTQ equality, and reproductive freedom.

Defending civil liberties in the state of Texas is a constant battle, but a rewarding one. We will continue to work daily in the courts, legislatures and in the community to defend and preserve the individual rights and liberties guaranteed to every person in this country by the Constitution and laws of the United States.

Join the ACLU of Texas 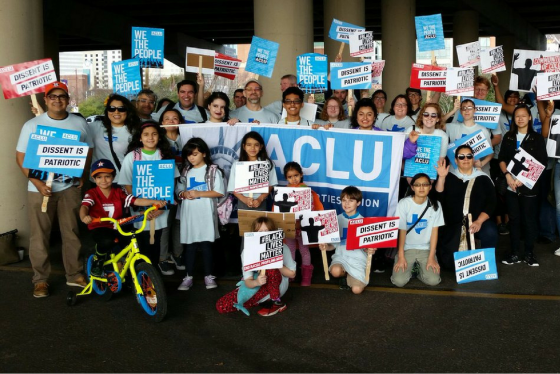 Join the ACLU of Texas