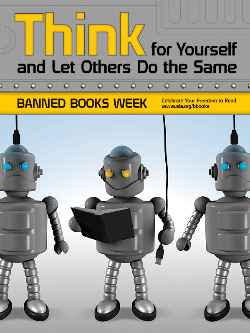 By Jose Medina ACLU of Texas Media Coordinator Banned Books Week starts today. And as the ACLU of Texas does each year, it has released "Free People Read Freely," a report on challenged, restricted and banned books in Texas public schools. Why we do this Books are a tangible representation of our freedom of expression. Banning books is often an expression of fear - fear of differences, fear of new ideas and thoughts, fear of the unknown. No matter how well-intended, banning books - especially by those who won't even read the 'offensive' material to see if the educational value meets or exceeds the weight of the objections against them - is censorship and infringes on the rights of a free society. Parents should exercise their rights to decide what is appropriate reading material for their own children; but they overreach when they seek to decide for other parents what is good for all children. This year we're happy to report only 20 books were banned in Texas schools. But that's still 20 cases in which censorship was successful. Some examples of documented bans in this year's report include "The Gossip Girl" series, Judy Blume's "Forever..." and Lauren Myracle's "ttfn." See the full list in our report. In observance of Banned Books Week, we're asking you to pick up a book and read. Don't have time? Fine, then give the gift of a book. There are also plenty of Banned Books Week events all over the country, including those listed below and sponsored by the ACLU of Texas. For more Banned Books Week events all over the country, visit the American Library Association Banned Books Week Web site. Now get readin'. ACLU of Texas Banned Books Week Events Corpus Christi What: Readings of banned books Where: Half Priced Books, 5425 South Padre Island Drive When: Saturday, Sept. 25, 4:30 p.m. Celebrity readers will include Reverend Phil Douglas of the Unitarian Universalist Church and Leanne Libby, columnist for the Caller-Times. Houston What: Houston Chapter Banned Books Event Where: Central Library, 500 McKinney, www.houstonlibrary.org When: Saturday, Oct. 2, 11 a.m. - 4:45 p.m. 11 a.m. - 12 p.m. Banned Books Discussion: J.D. Salinger's "Catcher in the Rye" 12 p.m. - 3 p.m. 2nd Annual Banned Books Readout Celebrate your freedom to read with local educators, poets, authors, avid readers and more join members of the Houston Chapter of the ACLU of Texas and staff of the Houston Public Library to read passages from your favorite banned books. 3:15 p.m. - 4:45 p.m. Banned Books Movie: James and the Giant Peach A special presentation of the film based on Ronald Dahl's classic book. Directed by Tim Burton. Rated PG. San Antonio What: Readings and discussions Where: Central Library Gallery, 600 Soledad St. (Downtown) When: Thursday, Sept. 30, 7 p.m. Dotty Griffith, Director of Public Education for the ACLU of Texas will discuss 2010 Banned Books Report and the continuing impact of "To Kill a Mockingbird" 50 years later. Event is free and open to the public.
Related Issues

ACLU of Texas Responds to Governor Abbott’s Announcement of...

How Bills Like Texas’ SB 17 Use the Law to Discriminate

ACLU of Texas Statement on Hearing in Lawsuit Challenging Anti...