HOUSTON – The ACLU of Texas and ACLU National today filed a lawsuit to challenge the ordinances in seven cities in east Texas that prohibit abortion providers and advocates from operating within their city limits.

The ACLU is representing two organizations – Lilith Fund and Texas Equal Access Fund (TEA Fund) – labeled “criminal entities” by the cities for their pro-abortion views. Both organizations support people who need abortions and advocate for the right to access abortion. The lawsuit claims that the ordinances violate their rights to free expression and association protected under the First Amendment and, by designating them criminal, illegally impose punishment without a fair trial.

“These ordinances are unconstitutional,” said Anjali Salvador, staff attorney for the ACLU of Texas. “Abortion is legal in every state and city in the country. Cities cannot punish pro-abortion organizations for carrying out their important work – especially when they do so in a way that violates the First Amendment.”

On June 11, 2019, the city of Waskom, Texas, became the first in the state to pass an ordinance declaring itself a “sanctuary city for the unborn.” Soon after, six other east Texas cities — Naples, Joaquin, Tenaha, Rusk, Gary, and Wells — enacted similar ordinances. The ordinances state that if Roe v. Wade is ever overturned, abortion will be unlawful within the cities. In addition, the ordinances named eight reproductive rights organizations as “criminal organizations” and declared it unlawful for them to “operate within” the cities – including several, like Lilith Fund and TEA Fund, that do not themselves perform abortions.

“A major part of our work is to make sure every Texan knows their rights and can find legitimate, fact-based information about getting an abortion – regardless of income or zip code,” said Amanda Beatriz Williams, executive director of Lilith Fund. “These would-be abortion bans are deliberately designed to confuse people about their rights and push safe abortion care further out of reach. By joining this lawsuit, we’re fighting back against the lies and sending a message that all Texas communities deserve the rights, resources and information they need to make the best decisions for themselves and their families.”

“These extreme ordinances are a tactic for abortion opponents to score political points by infringing on our ability to educate and activate communities about their rights and the resources available to them,” said Kamyon Connor, executive director for Texas Equal Access Fund. “Access to reproductive care including abortion, which is still legal, allows individuals and families to receive the support needed to thrive in our state. Texas Equal Access Fund is proud to help people access abortion care and we will fight to protect our ability to continue doing this necessary work.”

Anti-abortion activists traveled to each of these cities to convince city officials to enact these ordinances. In the last year the ACLU has successfully blocked unconstitutional abortion bans and restrictions in other states.

“These anti-abortion ordinances are part of a nationwide attack on abortion access,” said Brigitte Amiri, deputy director of the ACLU Reproductive Freedom Project. “Whether it is bans on abortion, attempts to close clinics, or moves to silence people who support abortion access, the ACLU will fight against these unconstitutional and cruel measures.”

The suit is being brought by the ACLU of Texas, the ACLU Reproductive Freedom Project, and the ACLU Speech, Privacy and Technology Project before the U.S. District Court for the Eastern District of Texas. 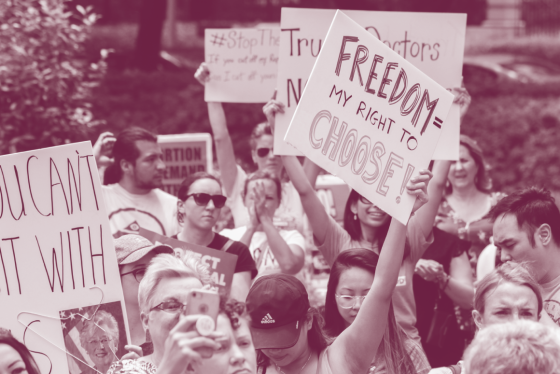