Greyhound is Throwing its Passengers Under the Bus

By Terri Burke, Executive Director, Executive
When he boarded a Greyhound bus in his home state of Utah bound for Louisiana, Deyvid Morales had one goal in mind for the four-day-long journey: Arrive in one piece to attend what he called “the college of his dreams.”
But Deyvid never made it to his dream destination.
Just 45 minutes from the college, his Greyhound bus made a pit-stop at a gas station. Border patrol agents boarded the bus unannounced and questioned people, including Deyvid, about their immigration status. Unaware of his rights, he admitted he only had a Mexican identification card and was quickly arrested and taken to a detention center in Louisiana. There, he waited four days until he was allowed to call his parents, and was detained another 13 days before he was released on $4,000 bail his family struggled to obtain. Finally back in Utah, Deyvid spent more than a year under house arrest, facing constant monitoring by the Federal government.
The experience had a profoundly negative impact on Deyvid’s life. He faced the extreme stress of deportation proceedings and the subsequent depression and fear that he would be kicked out of the only country he’s ever known, the one he came to as a 9-year-old. Perhaps most heartbreaking, Deyvid was never able to return to the college of which he once dreamed.
Unfortunately, “show-me-your-papers” stories like Deyvid’s are increasingly common. Throughout the country, the Trump administration’s immigration enforcement army has ramped up its efforts to search Greyhound buses. The uptick in patrolling areas throughout and even beyond the 100-mile border zone has led to harassment and discrimination against people of color, immigrants, and those with accents who do not fit border patrol’s biased definition of what it means to appear “lawful.”
This practice is not only offensive, but racial profiling is also illegal. The Fourth Amendment gives Greyhound the right to protect individuals from unlawful searches without probable cause. By writing a simple letter to the Department of Homeland Security, Greyhound could refuse immigration agents access to their private ticketed areas and buses absent probable cause or a warrant.
Yet despite efforts to encourage Greyhound to stand up to the DHS and border patrol, the company has not taken any meaningful action. When the ACLU, CREDO and Color of Change activists delivered more than 200,000 signed petitions to Greyhound headquarters in Dallas demanding that the company refuse border patrol agents access to their buses without legal justification, the company’s legal counsel said they could only refuse if Congress changed the law. The Constitution does not need to be changed: The Fourth Amendment has served us well for 227 years.
The U.S. is not a “show-me-your-papers” country. Whether you are traveling or living or working within 100 miles of the border or smack-dab in middle America, the Constitution still protects people’s inalienable rights under U.S. law.
Border patrol’s unlawful profiling, questioning, and arrests, coupled with their increased frequency and scope, are deeply troubling. CBP claims authority to conduct these stops even beyond the border zone. This is indicative of a broader policy to create even more fear and uncertainty in immigrant communities already being viciously attacked by the Trump administration.
Greyhound must protect all of its paying customers from unconstitutional harassment and demand that border patrol stop entering their buses without probable cause or a warrant. The company must also ramp up its efforts to disseminate Know Your Rights information to its riders — who have no legal obligation to prove their status — so they are prepared if border patrol continues their unlawful stops and searches. Riding Greyhound should be about transportation, not deportation.
We are going to bus stations in El Paso and Brownsville in the coming weeks to distribute Know Your Rights information to passengers. Sign up to join us and to help keep the pressure on Greyhound.

Greyhound: Your Riders have Rights 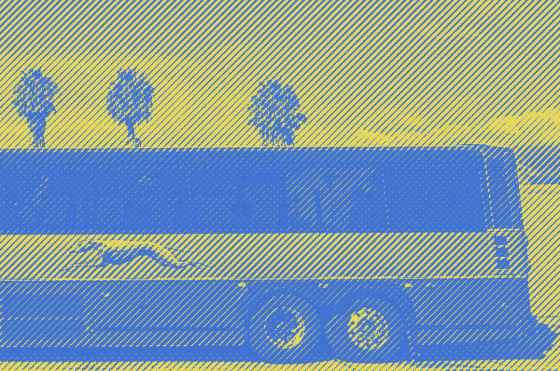