Transgender Awareness Week: The Road Ahead for Trans Texans

Trans Awareness week runs from Nov. 13 to Nov. 19 and ends, officially, on Nov. 20, with Transgender Day of Remembrance.

This week is about celebrating the power, love, and resilience that all trans people hold to build a better, gender-affirming, world – one free from discrimination and attacks at the social, political, and legal level.

This year and every year we mark Trans Awareness week by looking at how far we have come and how much further we still have to go to achieve true equality and safety for trans, non-binary, and gender diverse people. 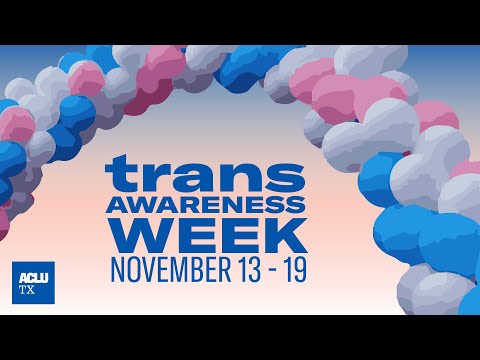 This past year has been a historic one for the transgender community, with a landmark U.S. Supreme Court decision in its first trans rights case that will shape the way courts view discrimination against LGBTQ people for years to come. In June, the Supreme Court issued a ruling on three separate cases, including that of ACLU plaintiff Aimee Stephens who was fired from her job for being transgender, affirming that the Civil Rights Act prohibits discrimination against LGBTQ people.

While the decision itself specifically only addressed employment, its impact has already been far-reaching. Courts across the country have already applied the Supreme Court’s ruling that LGBTQ people are protected from discrimination in employment to areas such as housing, health care, and education. The ACLU of Texas also cited that ruling in advocacy challenging school dress and grooming codes in hundreds of Texas school districts that are based in gender stereotypes and harmful to transgender and gender non-conforming students.

Transgender Awareness Week culminates with Transgender Day of Remembrance on Nov. 20. On that day, we lift up and honor the memories of the transgender people whose lives were lost to anti-transgender violence in that year and in previous years. So far, at least 34 transgender people have been killed in the U.S. this year, including at least two in Texas: Merci Mack in Dallas, and Helle Jae O’Regan in San Antonio. Although holding space to honor the lives of those lost to violence is a reminder of the dangers still faced by the transgender community, it is also a day to celebrate the trans people that are still living.

Transgender Awareness Week is about listening to and trusting trans people to be the architects of our own liberation. The fight for that Texas won’t end when this week does. The upcoming Texas legislative session is already confronting us with legislation targeting transgender youth. You can be ready to help us take action to fight these bills by pledging to stand up for transgender Texans.

But what this week allows us to do is take stock how far we have come, and the strength and resilience we have to face the challenges that may come. At the ACLU of Texas, we envision a Texas where trans and gender-diverse people no longer face barriers in healthcare, housing, employment and the legal system, and where every person can live their life to the fullest.

This week and every week, we are committed to making that vision a reality.