The view from the Matamoros, Mexico side of the Rio Grande — just across from Brownsville, Texas — reveals an unsettling scene.

Young women and children bathe openly in the murky green water, while others wash their clothes on the bank of the river that has claimed so many lives – most recently those of Idalia and her 21-month-old son Iker. This is the new painful reality of seeking asylum in the United States. 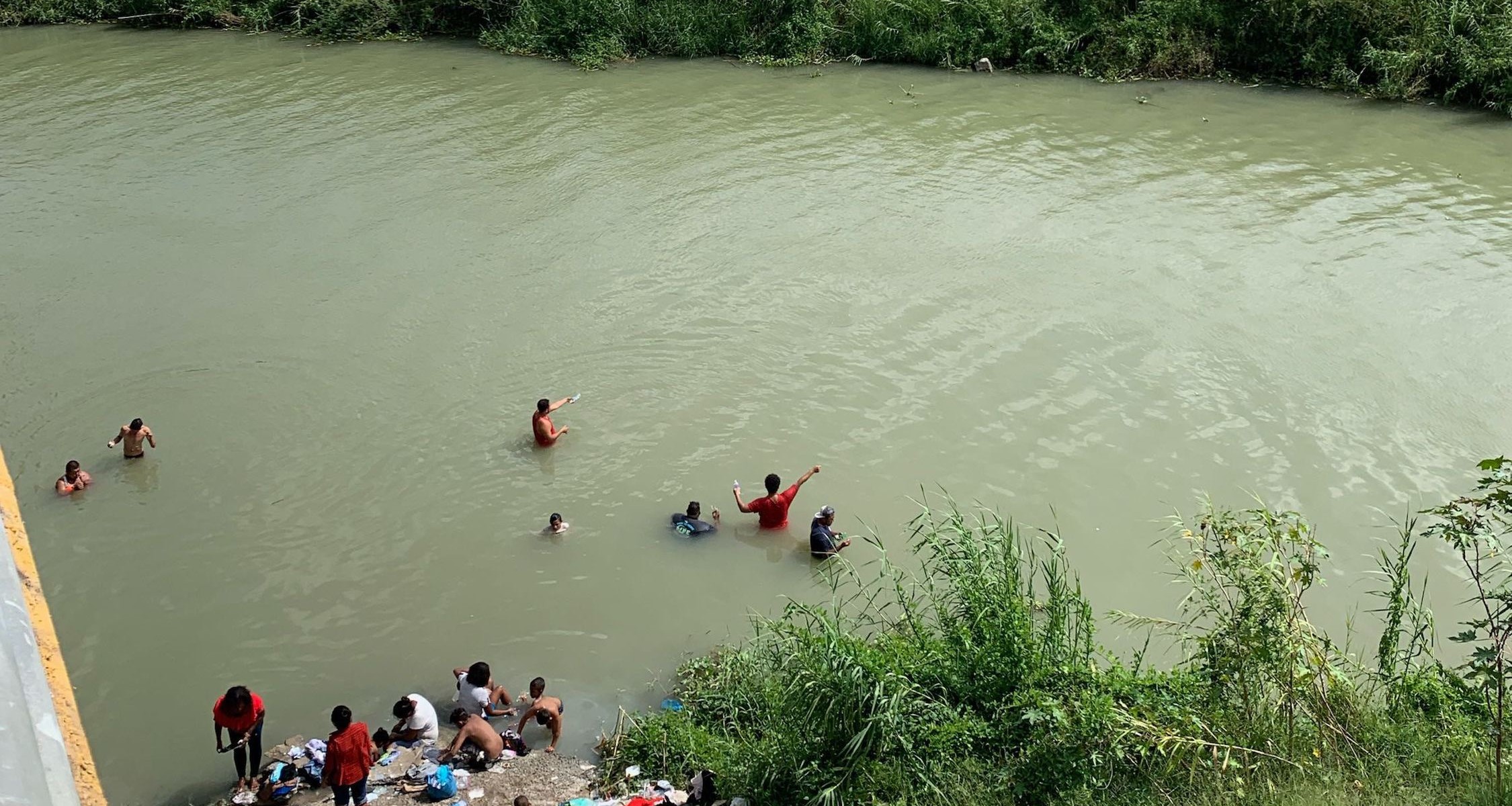 Women, children, and men bathing on the Mexican side of the Rio Grande, just across from Brownsville, Texas.

These families are not at the river by choice. They are being forced to wait in perilous conditions as a result of the Trump administration’s forced return to Mexico policy, which it perversely calls the Migrant Protection Protocols (MPP).

Under the policy, which the ACLU and partners are challenging in a federal lawsuit, people fleeing persecution and legally seeking asylum in the U.S. are forced to wait in Mexico for months on end while their cases proceed in U.S. immigration courts. The Trump administration wants people to think that the policy is benign, but that couldn’t be further from the truth. Since going into effect earlier this year, MPP has been actively putting the lives of asylum-seekers in grave danger. For the most vulnerable people, including pregnant women, young children, and babies, this danger is particularly acute. 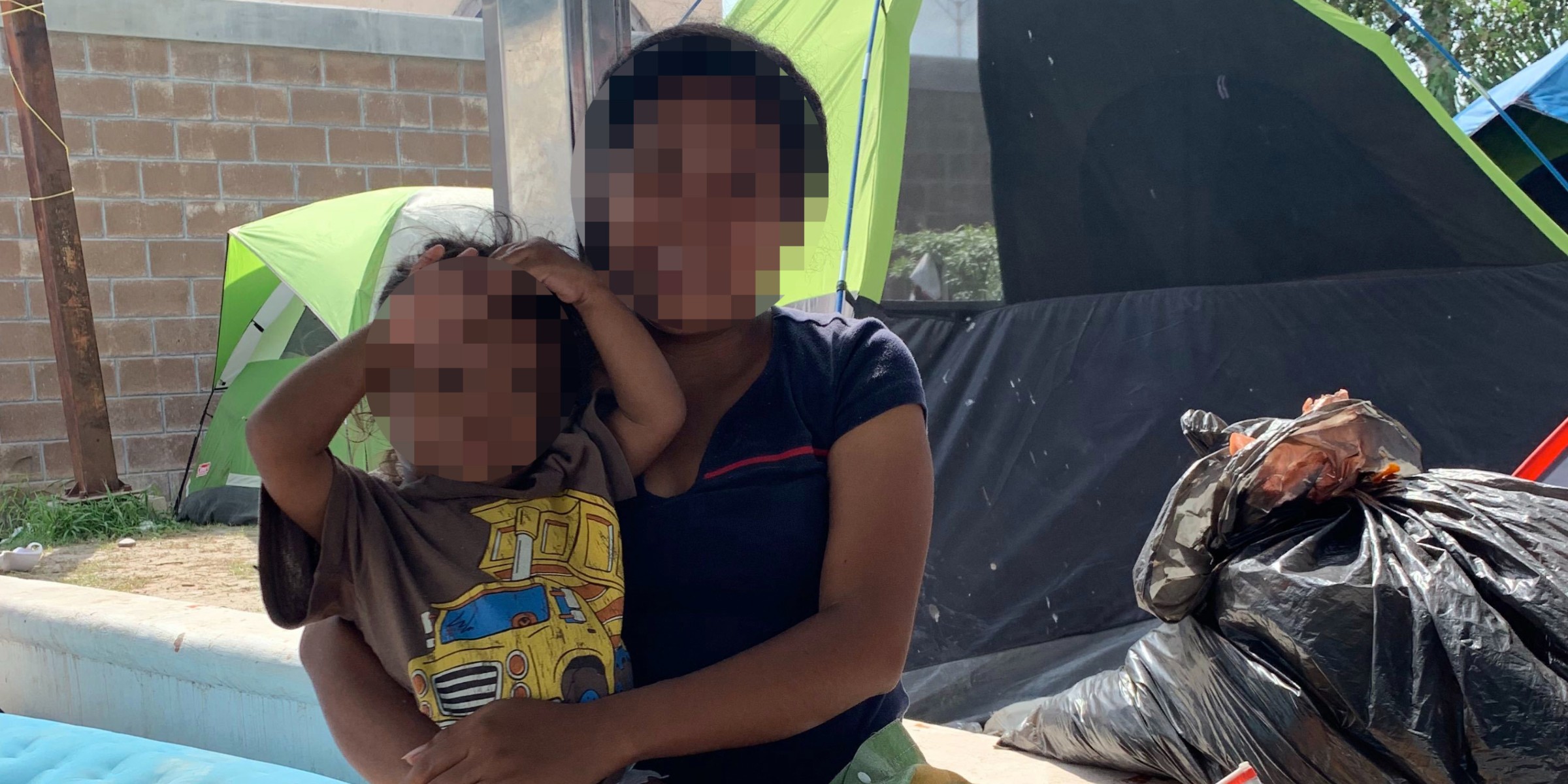 A young pregnant mother holds her toddler in a makeshift migrant encampment created to house asylum seekers sent back to Mexico as a result of the “Remain in Mexico” policy.

Recently, an 18-year-old Ecuadoran woman named Carolina,* who is more than four months pregnant, was sent to Mexico for a second time after attempting to legally claim asylum in the U.S. She was immediately placed into MPP and returned to Nuevo Laredo, Mexico, a city which according to the U.S. State Department is as dangerous as Afghanistan or Syria. A foreigner to Mexico, she had no safe place to go or community to which to turn. Alone, pregnant, and vulnerable, she was kidnapped and threatened with being sold or killed unless her family paid a ransom.

Carolina was eventually released by her kidnappers. Traumatized, she again returned to the international bridge in Laredo, Texas seeking safety that she believed only the U.S. could provide. But the kidnapping and fear of death was not enough for Customs and Border Protection (CBP) agents. They instead sent her to the same city where she had been kidnapped, failing even to refer her to an asylum officer to have her fear of returning to Mexico evaluated.

In Mexico, Carolina fearfully stayed close to the gates of the port of entry, terrified that local cartel scouts were waiting to kidnap her again. Thankfully, Carolina’s family had contacted advocates who tried to get her released from MPP. They were unsuccessful, but were able to help Carolina flee to Mexico City for safety. There, she is currently waiting for her next immigration court date — set to occur in an ad hoc “tent court” in Laredo, Texas — hundreds of miles from Mexico City and just across the river from where she almost lost her life. 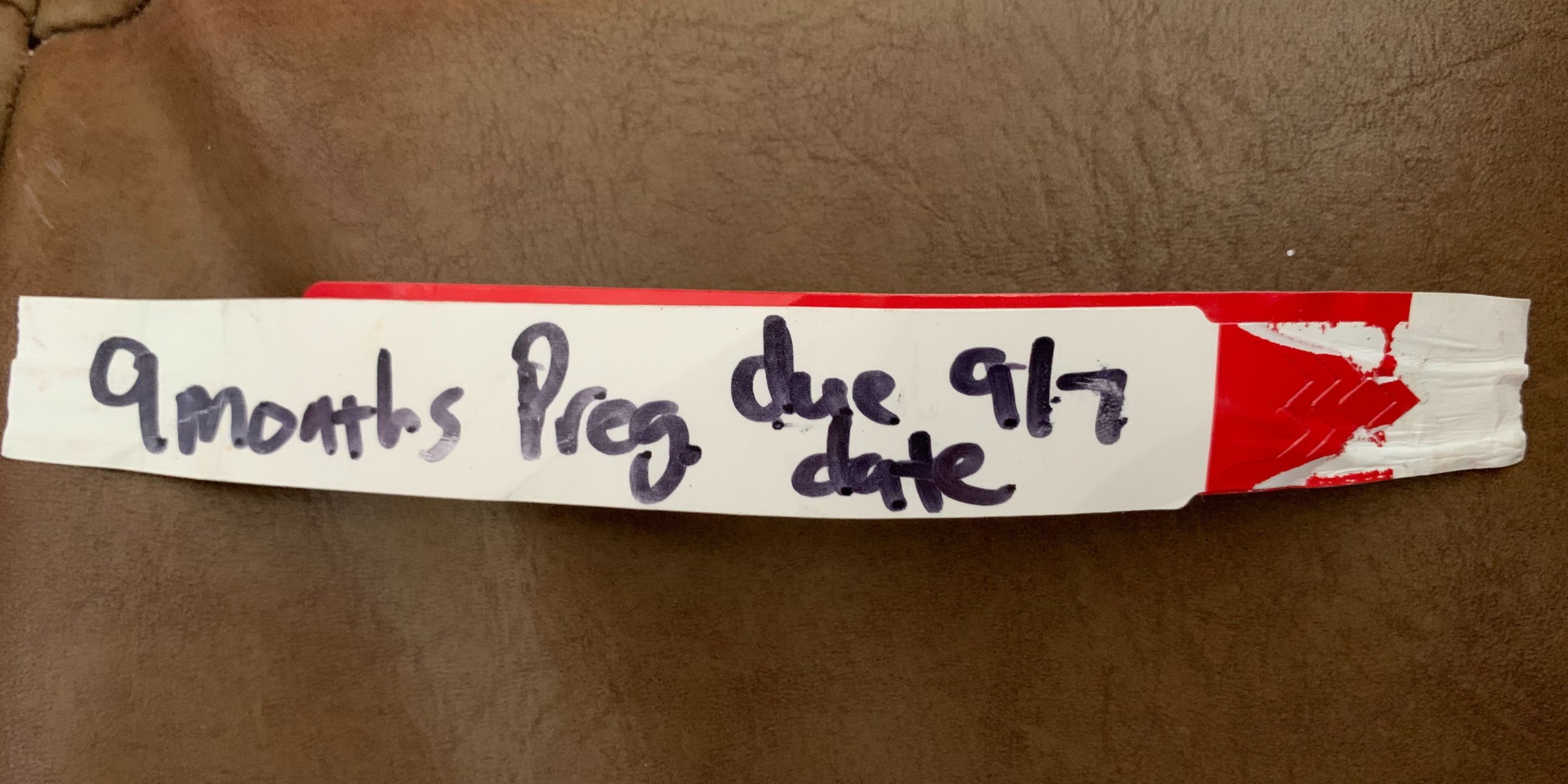 A red tag used to mark pregnant women while in Customs and Border Protection custody.

Hundreds of heartbreaking stories, just like Carolina’s, began to surface immediately after this policy went into effect in January 2019, and more so after the rapid expansion of the policy to Laredo and Brownsville, Texas in July. Nearly 50,000 people have been placed into MPP so far. One woman interviewed by attorneys described a CBP officer telling her she should abort her unborn child because “Trump didn’t want any more pregnant people here.”

MPP is part of a consistent pattern of xenophobic and racist efforts by the Trump administration and the Department of Homeland Security (DHS) officials to prevent people from lawfully being granted asylum in the U.S. Instead of welcoming asylum-seekers, as the U.S. has successfully done for decades, the Trump administration has engaged in a campaign of misinformation to provide cover for unlawful policies against people fleeing persecution.

This inhumane policy is not aimed at any national security interest or protecting us from serious criminals; it’s an attempt to make it nearly impossible for anyone, no matter what terror they’re fleeing from, to enter into the U.S.

MPP’s impact has been made even worse due to how federal agents are executing it. DHS is well aware that there are populations with special needs that should be exempt from MPP. In fact, it has written guidelines that outline the exemption of vulnerable people — specifically pregnant women — from being forced back into Mexico.

And while DHS knows that northern Mexican border cities are incredibly unsafe, particularly for migrants and asylum-seekers who are unable to defend themselves from being victimized, it continues to send the most vulnerable back to danger. In fact, it has been well documented that asylum-seekers subjected to MPP have faced rape, kidnapping, assault, extortion, and death after being forced to return to Mexico. 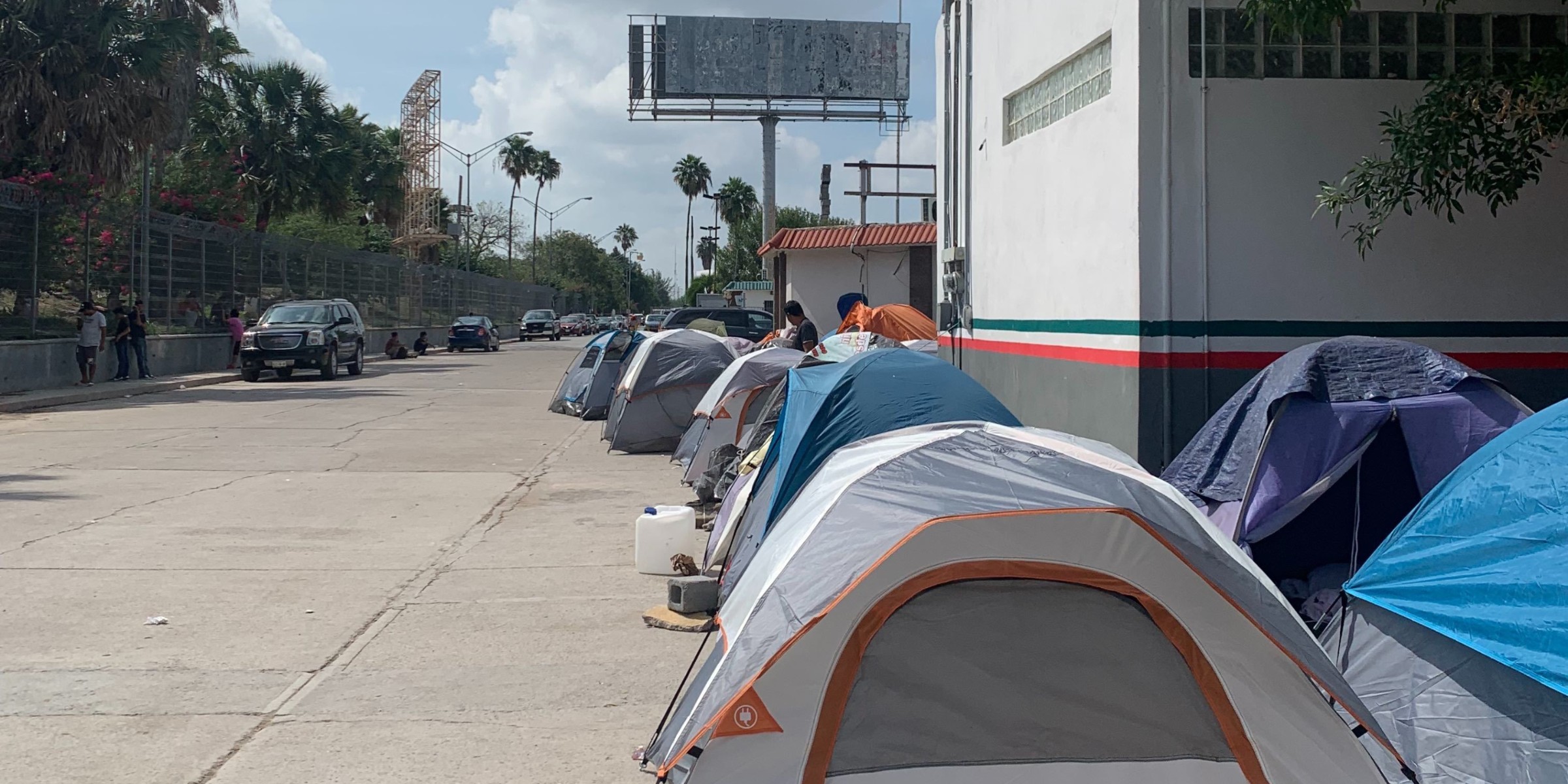 Makeshift tents lining the road in Matamoros, Mexico, to house asylum seekers looking for protection in the U.S.

The policy has also forced migrants and asylum-seekers to live in squalid conditions without access to proper housing, food, or sanitation. This has caused outrage in the medical community. Physicians for Human Rights has publicly warned that the health and lives of mothers and babies are at risk due to grossly unhygienic living conditions, insufficient nutrition, lack of medical care, and inadequate access to potable water at makeshift encampments of people forced into MPP.

The safety and health conditions that pregnant women are forced to endure while languishing in Mexico are abhorrent and unacceptable. And it is happening right at our doorstep.

That is why the ACLU of Texas and ACLU Border Rights Center interviewed 18 pregnant women, including Carolina, and filed an official complaint with the DHS Office of Inspector General, demanding a return to safety inside the U.S. for all pregnant women in MPP.

Each of the women listed in the complaint have their own harrowing story of legally seeking refuge in the United States, and instead being cruelly denied protection and sent to Mexico without any regard for their safety.

MPP must end. Every day it is in effect, lives are in imminent risk. In the meantime, the special exemptions for pregnant women and other vulnerable groups must be followed by U.S. immigration authorities. Because what happens along the Rio Grande and the entire borderlands reflects on the conscience of our entire nation.

*Carolina is a pseudonym used to protect the asylum seeker from reprisals.

Our Fight Against the Muslim Ban Showed the Solidarity We Need to...