Criminal justice reform has been a hot button topic in Texas for decades. And with good reason.

Texas incarcerates more people than any other state in the nation. Tens of thousands of Texans enter into a system that aggressively seeks to punish — not rehabilitate — community members, a trend that has compounded over many years.

Between over-policing of Black and Brown communities, harsh sentencing laws, unjust bail policies, conditions of our state jails, and lackluster re-entry programs that leave people struggling to reintegrate back into society, the pipeline of imprisonment has devastated lives and entire communities in Texas.

The ACLU of Texas Campaign for Smart Justice looks to dismantle these archaic practices and rebuild something better in their place. We recently convened a meeting with three important groups at the ACLU of Texas — the Smart Justice Speakers Bureau, Women’s Legislative Team, and the Dallas District Attorney Advisory Board — to meet, connect, reflect, and share stories from each member’s own intimate experiences with the criminal justice system in Texas. The goal of the convening was to promote fellowship and bring ideas together to create a larger, collective vision for local and statewide Smart Justice reform.

Read more from three Smart Justice leaders below. They share their experiences working with the ACLU of Texas, their Smart Justice passions, and what they see for the future of reform in Texas. 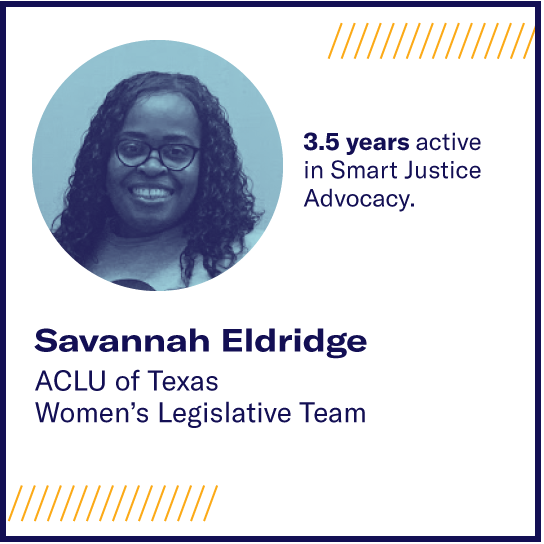 What has being involved with the Women’s Legislative Team meant or done for you personally or professionally?
I think personally, I just feel like my self confidence has grown. It has helped me be able to navigate around conversations around criminal justice reform, and just realizing my potential to get things done. But also accepting and understanding that sometimes I may have to be in some uncomfortable spaces or in front of folks who may not have the same view that I do. But that’s still okay, you know? And so lately I’ve been unapologetic, just fearless, and really loud about the things that I’m passionate about. I feel like just being a part of the Smart Justice campaign overall has helped me understand that my activism needs to be more structured and strategic so that I can not only be heard, but also understood.

What area of Smart Justice reform are you most passionate about and why?
I’m most passionate about sentencing reform. My younger brother Frank was given a life sentence due to sentencing enhancement here in Texas that was handed down by the judge. And so it really hurt me to hear the prosecutor in the court ask the judge to make an example out of my brother. When he got his sentence, I was just determined to change that narrative because I kept thinking, playing it in my head, “Make an example.” And how can I really spin that to change the way that people looked at my loved one? I wanted to make a positive example out of him by showing that it’s not an isolated incident. So I started by doing research locally, to really examine how sentences are enhanced to get a better understanding of that. And I learned that ⅔ of people serving life sentences are African Americans. And I believe that Texas has just become dependent upon life, and virtual life sentences, as a mechanism for maintenance of public safety. We really need to establish a sentencing review committee to try to ensure proportionality of terms and making sure that laws are just. I do understand that reform doesn’t always look like changing every existing law, but I want to be sure that legislators are not pushing policies that are partial. So that’s why I founded Be Frank, Inc. and I want to focus on advocating against imposing sentence enhancements without oversight and for the legal empowerment of families. 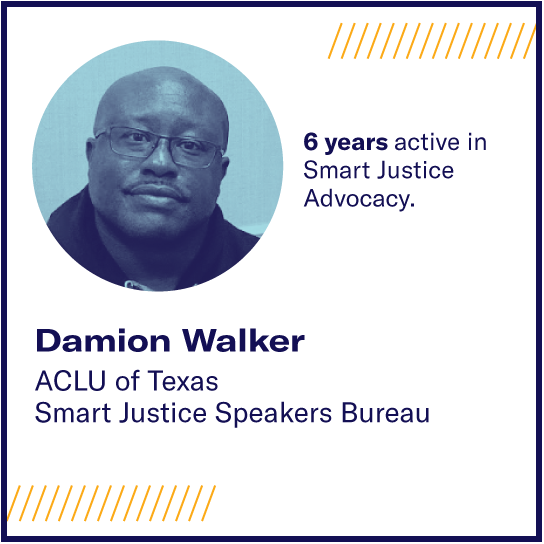 What has being involved in the Speakers Bureau meant or done for you personally or professionally?
Personally it just allowed me to, I guess I have more confidence in telling my story. I think my first three or four years out [of prison] I never really spoke about being locked up... I always tried to keep it seperate. And so when I came into the Speakers Bureau, like it was really okay to talk about it, not just talk about it in circles. It was ok to talk about not only what you overcame but how it affected you and every single aspect about it. So that was good. Professionally, just being associated with Anthony Graves, the ACLU of Texas, and Texas Southern University... it’s given me another level of validity. With people you can drop those names or you can walk into a room and they know that if you’re with the ACLU, you’ve been prepared… Professionally it’s put me a couple levels up as far as people being willing to collaborate.

What area of Smart Justice reform are you most passionate about and why?
It flows over into a couple, but I still would say re-entry. Because when I got out in 2010 after 17 years, [I realized] that men and women need support. There are things that I still go through after nine years after being released, I mean a normal person wouldn’t struggle with. So being able to be that support system, education, finances as far as making sure you get jobs, training; there’s so many things. And it has to be, as best as possible, an individual plan even though we kind of group everybody together. Re-entry to me is something that is a science, and it’s either people care or people getting paid to do it. So re-entry before, during the release, and after the release, that’s kind of my passion. 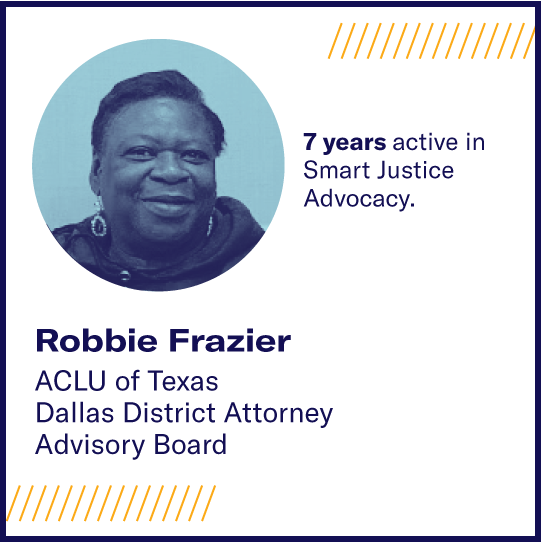 What area of Smart Justice reform are you most passionate about and why?
I think bail reform. Because for me, the times that I was [sent] to jail and my bail wasn’t very high, I [still] did not have the funds to get out of jail. So it has caused me to lose jobs and whatever happens to people who just don’t have that kind of cash on hand...

Smart Sentencing: The Right Strategy for Addressing Substance Use...