The Commission on Election Integrity Was a Sham From the Start

Yesterday, President Trump announced he had dissolved the Presidential Commission on Election Integrity. In a series of tweets explaining his decision, the president blamed “many mostly Democrat states” for protecting their voters’ privacy, compounded the sinister myth of widespread voter fraud, and further undermined American institutions by repeating his dangerous pre-election refrain that the “system is rigged.”

But the Election Integrity Commission has been a sham from the start, the product of a thin-skinned president’s bruised ego over losing the popular vote, and a coordinated and unscrupulous movement to purge low-income Americans and people of color from the voter rolls.

State resistance to the Commission’s request for voters’ names, addresses, dates of birth, party affiliations and the last four digits of their Social Security numbers, had nothing to do with partisanship. Some states—like Idaho, Oregon, Maryland and Maine—were statutorily prevented from disclosing such information. Others flatly refused; Mississippi’s Republican Secretary of State Delbert Hosemann, for example, told the Commission that it could "go jump in the Gulf of Mexico."

Moreover, the inner workings of the Commission were so impenetrable that even Matt Dunlap, Maine’s Secretary of State—who sat on the Commission itself— had to sue it just to find out what it was doing.

Unsurprisingly, Texas was not among the many states that rejected the Commission’s request for sensitive voter information, indicating it would hand over information it deemed public under Texas law. And so last July the ACLU of Texas filed an open records request with the Texas Secretary of State to find out how the State responded to the Commission’s request, and to determine whether our state lawmakers had agreed to hand over any sensitive voter information. 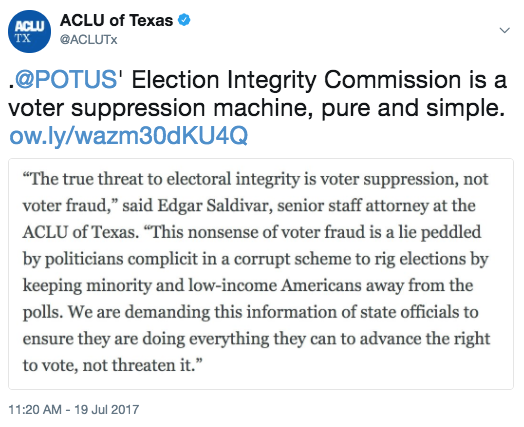 In response to our open records request, the State confirmed in early August that it had not yet provided the Commission any data, but we learned that at least one court issued a temporary restraining order in a lawsuit against the Commission, which caused the State to hold off on submitting such data to the Commission indefinitely. The State’s apparent willingness to accommodate even partially a sham voter suppression commission prior to court intervention is disturbing, but predictable given Texas’s recent history with voter suppression tactics.

In addition to the ongoing litigation over its redistricting scheme that violates the Voting Rights Act, according to one federal court ruling, Texas’s 2011 voter ID law instantly threatened to disenfranchise 600,000 Texans, which is why it, too, has spent the last several years in court. The 5th Circuit Court of Appeals has already ruled that the law disproportionately burdens people of color, and the only legal question that remains is whether or not it did so on purpose.

In any event, the principal threat to election integrity is voter suppression, not fraud. Instead of constantly throwing up obstacles that prevent Texans from voting, the State should be doing everything in its power to encourage voters to go to the polls. This Commission’s cynical mission and timely demise should serve as a lesson to state lawmakers scheming to silence Texans’ voices, and the ACLU of Texas will continue to oppose their underhanded and undemocratic efforts.

Like My Illegal Voting Charge, Capitol Riot Shows Racism in...

Five Things to Remember When Voting in Person in Texas