SB4, DACA, and the Long Fight Ahead for Texas Immigrants

It’s a turbulent time to be an immigrant in Texas.  And an embarrassing time to be, as I am, a fifth generation Texan and native-born Houstonian.

On the one hand, the court’s ruling on SB4 constitutes an early and extraordinary victory for Texas communities and our shared constitutional values. On the other, the President’s DACA decision imperils the futures of some 800,000 Dreamers, 120,000 of whom call Texas home.

Had SB4 gone into effect on Sept. 1 as scheduled, it would have compelled every law enforcement officer in the state to serve on Donald Trump’s deportation force and would have stripped the authority of our local elected officials to control their own resources.  It would have threatened officials with heavy fines, removal from office and even jail time for disagreeing with it. And it would have driven undocumented witnesses and victims of crime into the shadows, making Texans everywhere less safe.

The Texas legislature has a reliable history of ignoring the Constitution when writing law, but in this instance Judge Orlando Garcia noticed. In his 94-page ruling, the judge acknowledged that the legislature is “free to ignore the pleas of city and county officials, along with local police departments, who are in the trenches,” but that it was not at liberty “to exercise its authority in a manner that violates the U.S. Constitution.”

President Trump’s decision to terminate DACA is every bit as sinister as the nativist legislative motivations behind SB4. For years, the program has served as a critical lifeline for hundreds of thousands of young immigrants who came to this country as children, and who have spent every minute since working to achieve the American dream. They have done everything their government has asked them to do, and have been repaid with cruelty.

In a perfect world, our state and federal lawmakers would take a long look around at the unimaginable havoc Hurricane Harvey has wrought on our state over the past two weeks. They would acknowledge that Texas’s Dreamers were victims of the flood, first responders to the flood, and at least one—Alonso Guillen of Lufkin—was a volunteer who gave his life to rescue his fellow Texans from the flood.

In a perfect world, they would decide that the millions of dollars required to defend a racist and unconstitutional law like SB4 in court might be better spent on disaster relief. They would appreciate the scope and the difficulty of the rebuilding effort that is only just now beginning, and understand that this is the worst possible time to drive away those members of our communities whose help we will absolutely need to rebuild. And they would know—better now than ever—that no one should ever have to fear first responders.

But ours is not a perfect world. Governor Abbott and Attorney General Ken Paxton wasted no time declaring their intention to appeal the ruling, while Dreamers and their allies will have to mobilize, as they did in 2012, to assert their rights and their very humanity not before a sympathetic president, but before an ineffectual Congress hostile to their interests.

And so it falls to all of us to ensure our lawmakers do the right thing, whether they want to or not. The ACLU, along with communities throughout Texas, will continue to oppose  Governor Abbott’s and AG Ken Paxton’s attempts to reinstate SB4 for as long as it takes. And along with our affiliate partners all across the country, we will press Congress to pass a standalone bipartisan Dream Act.

We are in a fight for the soul of our state and of our nation. Whether in court, Congress, or in the streets, we must stand united against the cruel and cynical forces that have chosen to sow chaos, uncertainty and division into our communities. We must fight for a Texas we can all believe in, and for an America that we can be proud of. 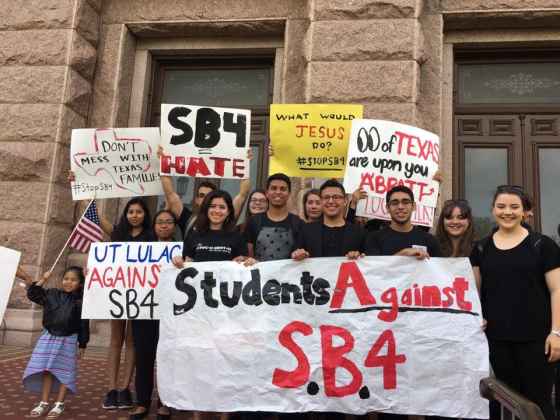 Know Your Rights Under SB4

Know Your Rights Under SB4