When Barbara Jordan — a Texan, a tireless civil rights leader, and the first Black U.S. congresswoman from the South — spoke those words in 1976, she understood a fundamental truth: When the U.S. Constitution was written, its promises were not extended to Black people.

As the summer 2020 protests over George Floyd's murder revealed, what Americans want now is to make things right and to build a better society that centers systemic equality, a foundation where everyone can thrive. Systemic Equality is a racial justice agenda that seeks to address a legacy of racism and systemic inequality in Texas and the nation through policy and legal advocacy to strike down laws and practices that exclude and harm Black Texans.

Leveraging the policy, legal and communications strength of the ACLU of Texas, Systemic Equality aims to erase negative impacts of racism from the original sin of slavery, to Jim Crow, through present day. Our goal is to build a state and nation where every person can achieve their highest potential, unhampered by structural and institutional racism. We will focus on (1) promoting reconciliation to reduce historical impacts of systemic inequality, such as reforming policing and reducing mass incarceration; (2) extending empowerment through efforts such as protecting voting rights; and (3) increasing access to help close racial gaps in critical areas like abortion access and disaster recovery. 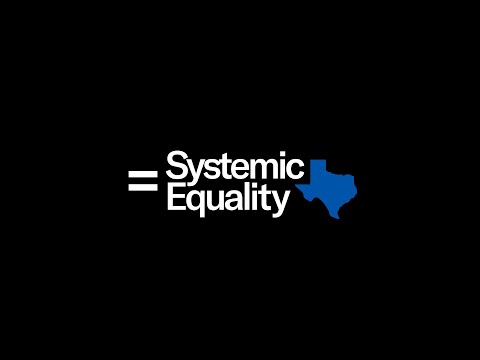 Take action today: Join us in our continued fight for civil rights and civil liberties as we redouble our efforts to challenge economic, social, and government policies that promote oppression and inequality.

The scars created by colonialism, hundreds of years of slavery, and racially discriminatory policies are deep. Our work will directly address the impact of that history on our present, including the scourge of mass incarceration and violent overpolicing that both disproportionately affect Black Texans. Click here to read more.

The right to vote is the heart of our democracy, but lawmakers continue to pursue legislation that would make it harder for Black, Indigenous and people of color (BIPOC) to vote. We advance a vision of voting that is accessible, convenient and safe through legislation and advocacy, and through our work in the courts. Click here to read more.

A lingering global pandemic and a devastating 2021 statewide winter blackout have exacerbated existing wealth gaps between Black and white households, and the ability of Black people to survive and thrive. Our work will focus on policies to close those gaps, especially racial economic disparities that emerge from disaster recovery, and access to reproductive care. Click here to read more.

Elections Are Celebrations, Not Opportunities for Intimidation